It was not until the late 18th Century that craftsmanship started to become economically important for the Ladin population. Each valley developed its own specific products: Ampezzo specialised in silver filigree jewellery and souvenirs for the flourishing tourist trade. In Gröden/Val Gardena along with religious wood sculptures a big toy industry developed linking local handicrafts to a world market. Itinerant painters from the Fassa Valley moved to Tyrol and Southern Bavaria on a yearly basis, where they decorated house facades, traditional wooden dining rooms (Stuben) and furniture with their multicoloured artwork. Gadertal/Val Badia exported distinctive decorated chests to the Tyrolean region.

Between the two World Wars, the last handicraft products suffered from bad economic conditions and increasing competition. Today only the wooden sculptures of Gröden/Val Gardena remind us of the once great economic importance of handicrafts in the Ladin valleys.

The toy industry in Gröden/Val Gardena

During the 19th Century, millions of wooden toys left Gröden/Val Gardena each year. Dolls of all shapes and sizes, rocking horses, wooden animals and different types of toys filled the American and European markets.

Carving wooden toys developed from being a secondary occupation for farmers in the 18th Century, to a real cottage industry during the 19th Century. By 1850, there were around 2500 woodcarvers, men and women, working in Gröden/Val Gardena. The whole family was involved with even children having to carry out some easy tasks. Day by day and often far into the night, large quantities of identical toys were produced. A decline in quality combined with increased competition meant that by 1900 the export market for the Gröden/Val Gardena toy industry had virtually died out. On the other hand, religious and non-religious wood sculptures, which craftsmen had been making since the 17th Century, still provide people from Gröden/Val Gardena with a decent income. 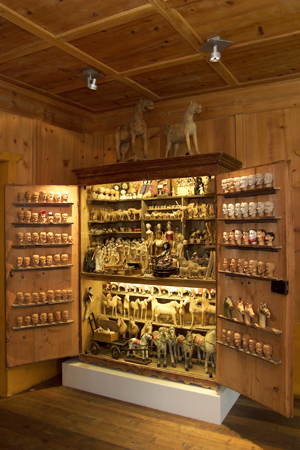 Itinerant painters in the Fassa Valley

At the beginning of the 19th Century, life for people in the Fassa Valley took a turn for the worse due to wars, high taxes, illness and poor harvests. Superstition and magic were expressed in symbolism and defensive magic by the Fassa decorative painters. Bright colours and a wide range of ornamental patterns covered house facades, traditional wooden dining rooms (Stuben), furniture and other household objects. Large numbers of men were able to better their lifestyles thanks to extra work done outside the valley: their brightly coloured decorative work found favour above all in the rural areas of Central Europe.

The Fassa painters worked their way along the Dolomite passes and went north across the Alps on foot, finding work in Vorarlberg, Tyrol, Southern Bavaria and around Salzburg, as well as Carinthia and Styria. Their traces can also be found in Switzerland and Hungary. Postcards, often hand-painted, bear witness to their destinations, contacts and experiences.

The chests from Enneberg/San Virgilio di Marebbe and Gadertal/Val Badia hold their own amongst Ladin furniture with the front of the chest demonstrating a clear design structure.

The panels with their arches and fretwork, along with other similar ornamentation, reflect an ornamental tradition harking back to the Renaissance. During the second half of the 18th Century a further decorative element was added with rich monochrome ornamentation.

During the 18th and 19th Centuries this improved carpentry developed into a profitable sideline, especially for farmers, who managed to sell many chests throughout the Ladin valleys and in Tyrol. 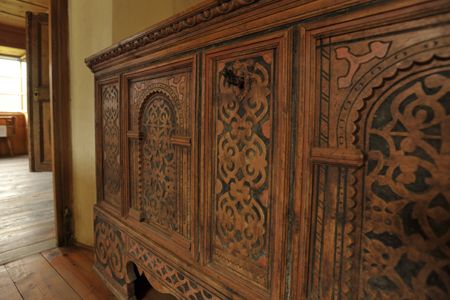 In the 18th Century Venetian goldsmiths encouraged the production of women’s jewellery in Cortina made from thin silver thread woven together. In 1874, the local Art School started a course specialising in filigree production, which led to an improved technique and to a much wider range of products. Due to a stark rise in tourism in the second half of the 19th Century, the demand for souvenirs increased. Both of these factors led to a flourishing filigree industry in Ampezzo which developed into an important economic sector. It was the detailed imitations of flowers, especially edelweiss, lily of the valley and anemone which became particularly well-known.