In the very heart of the Dolomites live more than 30,000 Dolomite Ladins whose identity is characterised mainly by two important features: the uniqueness of their language, which derives from popular Latin, and the extraordinary mountain landscape at the heart of the southern Alps.

It is only thanks to the physical characteristics of this landscape that the Ladin language has survived today. It is the eldest of all languages spoken in this region and is restricted by the Italian and the German cultural and linguistic areas that surround it.

The way through the museum focuses on some significant aspects of the present and past lives of the Dolomite Ladins, highlighting the important influences of cross-regional events on the lives of the population and pinpointing the existing interrelations between landscape forms and lifestyles. The history of the Castle

In about 1230, some servants of the Bishop of Brixen/Bressanone built a three-storey, separate living tower. It was first documented in 1290 as “turris in Geder” and documents the heart of the judicial Tower in Gader (the actual translation should be “Tower in Quadra”). This feudal land of the Bishops of Brixen/Bressanone was held by the Lords of Rodank-Schöneck until 1331. Over the following years a crennellated wall with a walkway was built around the castle along with a small building with living quarters (Palas). The tower, to which another two floors were added, was used as a granary.

In 1426 Bishop Berthold brought the judiciary directly under control of the bishopric and appointed clerks as judges and stewards. After 1580, further building work was done, the Roman Palas was expanded to its present size and two circular towers were added to the castle walls.
When the Bishops of Brixen/Bressanone lost control of the judicial Tower in Gader in 1803, the castle was bought by farming families whose descendants lived there until it was turned into a museum. 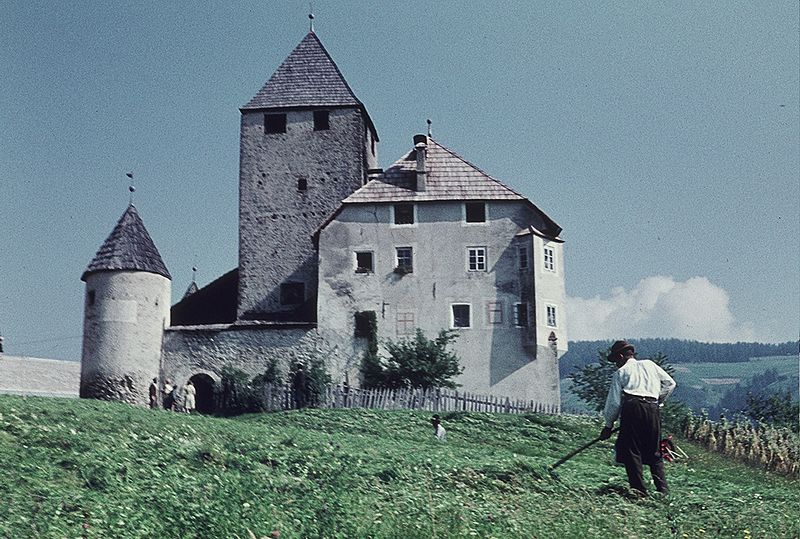